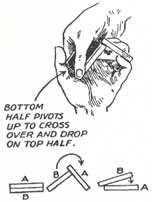 I’m not sure I ever wanted to “grow up” to be a magician, but I was pretty fascinated with it as a kid, and more serious about it than most. I knew the disappearing quarter tricks, had the special card decks, the fancy scarfs and foam balls. Once I went to a magic auction and won a box that could make anything the size of a baby rabbit appear or disappear. And, always, there were the trips to North Austin to a small converted shed in the backyard of a house where The Great Scott sold his magic books and items for eager kids and professional magicians alike.

He visited my elementary school once. My mom still has the photo of him pouring milk in my ear and pumping it out of the other. Among the right circles, I’d say he was pretty well known. It doesn’t surprise me that he and his wife have a web site.

Fred Donaldson (aka The Great Scott) passed away last week, age 79. That same week, I attended a course by Edward Tufte, who dedicates a chapter of the cloud book to magic (the included image is from it). A day after that, my kids saw another magician perform at the library, and a new generation of magicians was born.