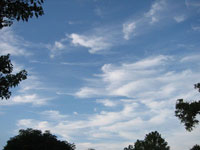 They warned of 70mph winds, massive flooding, and loss of power, but in the last days before landfall Hurricane Rita shifted north and Austin didn’t receive even a drop of rain. The organizers of Austin City Limits Music Festival were so proud of themselves for waiting to cancel the weekend concert series, but the evacuees were less pleased — stuck in Austin at shelters because the hotels were booked for an ACL in limbo.

Meanwhile, people panic and grocery store shelves are almost out of canned food and bottled water. The less than 3-hour trip from Houston becomes a long full day of gas shortages and frustrated evacuees.

Cars are not an efficient way to transport large numbers of people, but the rail and public transportation infrastructure in this oil state is pathetic. Nightline’s Ted Koppel asked the obvious question to someone from Homeland Security, but they acted as if they didn’t even understand there was a problem. If you can’t get out of a major city with a week’s notice, how can you get out in a real emergency?