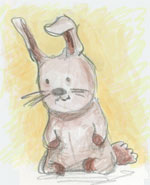 Easter is a time of rebirth and starting over. So today I’m flipping over two new things.

The first, to fulfill a new year’s resolution that died before February. I rearranged my office and drawing desk yesterday to make everything more accessible, and I was doodling last night when this silly little bunny sketch came out. I have a few more drawings and pieces of animation in various states of completion that I’d like to post too, but I’m not going to let the backlog of “finishing” anything stop me from posting now on a weekly basis. Really.

Secondly, I made a long-overdue server change this weekend. About a year ago I gave up self-hosting on an old Linux box and moved this site and email to TextDrive. I had high hopes. It was run by smart people with good ideas, and it was officially endorsed by the Ruby on Rails project.

Unfortunately the server I was hosted on (Bidwell) was down much too frequently. I couldn’t help comparing it to the near-flawless uptime I had running my own box on a static DSL address. Lots of little problems and broken promises added to the overall frustration. And running underneath the whole mess was an undercurrent of unprofessionalism. I gave them a year to sort it out and it never got better.

Which is too bad, because there was a lot of potential there. I still wish them good luck, and especially to the Joyent team as well.

Today my site is live on DreamHost. I’ve had mostly good experiences using DreamHost to manage the STAPLE! web site in the last two years. Here’s hoping I won’t have to switch again anytime soon.