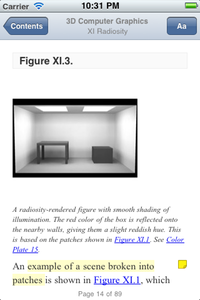 Although I had worked a little on iOS apps before, updating an existing app for the iPad and tinkering with unfinished apps, the first 1.0 for iOS that I played a significant role in just shipped last week: a “mobile version of Bookshelf”:itunes.apple.com/us/app/vi… for VitalSource. The iPhone version has been in development off and on for a while, but I took over the project fairly late in development, with a coding frenzy through the summer as we switched file formats and scrambled to finish in time for fall students.

Today the app broke into the App Store’s top 25 for free Education apps.

It’s designed for existing VitalSource customers, supporting both our file formats (for XML-based reflowable content or PDF-like fixed layout), with synced highlights, figure search, and offline access. At its core the app is 3 parts: a large C++ codebase, brand new Objective-C UI code, and a bunch of clever WebKit and JavaScript work. In many ways it’s a more difficult project than my other iPad app (still in development), but some great coders contributed to different parts of the architecture, before and after I joined the project.

Nearly 10 years ago, when I was hired at VitalSource to build the Mac version of our e-book reader, we delivered textbooks on DVD-ROMs and our technology was years ahead of everyone else. Today, and especially post-iPad, the market is a lot different, with some beautiful competition like “Inkling”:itunes.apple.com/us/app/in… Bookshelf for iPhone wasn’t first to the App Store, but it inherits an existing user base, strong platform, and large book inventory. I like VitalSource’s chances.